A praise, a ponder, and a polish

Lynne Dorfman and Diane Dougherty’s new book, A Closer Look: Learning More About Our Writers with Formative Assessment arrived in our warehouse today. We thought we’d give you a quick peek inside the book and in this guest blog post Lynne and Diane talk about how they are using videos with A Closer Look and specifically how one video highlights the important role students play in their own assessment.

A praise, a ponder, and a polish
By Lynne R. Dorfman & Diane Esolen Dougherty

When we imagined our new book, A Closer Look: Learning More About Our Writerswith Formative Assessment, with our editor, Bill Varner, we all agreed that it should be practical, useful, and easy to read. After all, assessment is a difficult topic to tackle, even if we focused on everyday, ongoing assessments.  Then we had an idea that changed everything: What if we could include more than a dozen short video clips that teachers could view in school, at home, or sitting on the beach?  Bill liked the idea, and with permissions from four different schools, our classroom snapshots came to life! 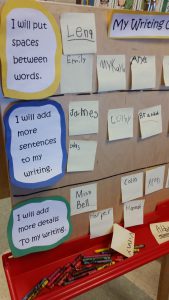 We share peer conferences, one-on-one conferences, small group, and whole group conferences in our book through descriptions in the running text and in QR codes. The one we would like to share with you today is a goal-setting conference that occurred in Kolleen Bell’s kindergarten classroom in early spring. Kolleen had spent several months looking through her students’ writing journals and taking notes about skills and strategies she felt they needed and could accomplish with some instruction and gentle nudges.  Every month or so, Kolleen would suggest three possible goals, post them on an easel, and ask her kindergarten students to write their names on sticky notes and place them next to the goal they wanted to work on for the next week or so.  We were amazed that kindergarteners knew exactly what they needed. They didn’t look to see where their best friend had placed his sticky note, they made a decision based on their own writing (See Figure 1 Goal Setting Chart).

In Harper’s conference, Kolleen offered a praise, a ponder, and a polish. Harper had written about her mom’s interview at the Intermediate School. First, Kolleen asked Harper what goal she wanted to work on and then checked for understanding. Did Harper know what adding more details to her writing really meant? She asked Harper to explain in her own words. We thought that was a great beginning.

Harper read her piece to Kolleen, and then Kolleen summarized Harper’s story after she read it aloud. Here is a chance for the student writer to say that something important was omitted or that the reader (listener) misunderstood something.  Harper did not challenge Kolleen, so Kolleen proceeded to praise Harper for her use of an exclamation mark to show excitement and then asked a question that Harper readily answered.  Harper added more details to her writing to clear up the confusion. Sometimes, the ponder really does become the polish.

Kolleen knew that Harper was an exceptional writer for her age and stage, so she offered a polish that became Harper’s new goal. Sometimes, a writer ends a piece of writing with what he (the writer) or the main character in the story is thinking and feeling. Harper added a sentence to reveal her excitement as a way to close her story. In future writing workshop sessions, Kolleen checked in with Harper to see if she could apply a sense of ending through the strategy of offering the character’s final thinking or emotion.

Goal setting conferences are a solid way to involve each student in the assessment process and differentiate instruction. It calls for the development of a writer’s identity – that is, where the student writer reflects on what he needs to do to move forward as a writer. If our students can begin to do this in kindergarten, imagine what they will be able to do by the time they are in fifth grade!