Jeff Anderson spends his days spreading his knowledge, energy, and joy to educators across the country as an author and presenter. But he started his career doing the same thing in the classroom with his students. Caroline Sweet was one of those students. She took the time to share her memory of Mr. Anderson when she was in his classroom in 1992. 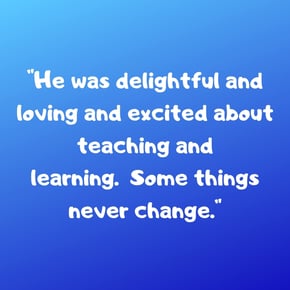 “Well, first of all, I still call him Mr. Anderson.  He was my 4th grade teacher in 1992 in Austin, Texas.  If you’ve ever been to one of his trainings, you’ll know that Mr. Anderson presents with a particular exuberance.  He moves around a lot with a little bounce to his step.  He talks fast and is so enthusiastic about grammar and writing.  He did all those things in 1992.  He just had floppier hair that he’d push back every now and then.

We sang a rap song about clouds.  He got so excited when a whiteboard was installed in our classroom.  A classmate brought in a chunk of the Berlin wall, which we thought was amazing.  We had a laser disc player on which we would watch this time lapse video of the decomposition of a fox.  We’d do a Wednesday circle where we’d talk about our feelings and then either laugh or cry.  We did a play.  I was a monkey.  He wore cowboy boots once in a while.  He called in a TV reporter friend, Marla Bean, to visit us.  I think because he knew I wanted to be a TV reporter (I did get a journalism degree).  He was delightful and loving and excited about teaching and learning.  Some things never change.”

Caroline Sweet is a Bilingual Literacy Coach at LCpl Nicholas S. Perez Elementary School in Austin, Texas.  She has been a bilingual educator for 14 years and is also working as a consultant for the NEW Spanish companion to Patterns of Power: Inviting Young Writers into the Conventions of Language, Grades 1–5 by Jeff Anderson and Whitney La Rocca coming this fall!