How a single word can change everything 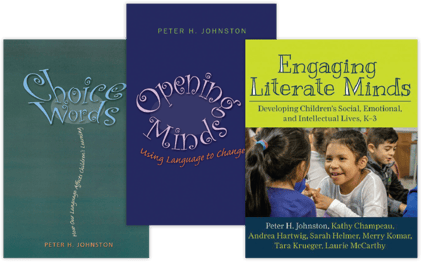 In Peter Johnston’s popular book, Choice Words, he demonstrates how a single word a teacher says (or doesn’t say) can have consequences for the literate lives of the children in your classroom. In his follow-up book, Opening Minds, he broadens his focus to show how engaging children with more productive talk supports their intellectual, social, and emotional development. While both books are filled with classroom vignettes and examples, many readers need more specific guidance on how to incorporate these ideas into their daily instruction.

So ten years ago, Peter and six colleagues set out to create classroom environments that reflected the values Peter put forward in Choice Words and Opening Minds. Engaging Literate Minds documents their journey, profiling classrooms and students that are thriving while also embracing the challenges they encountered along the way. Here’s a closer look into the work that led to this new resource and how—when used together—these books can help you create a classroom that supports not only students’ intellectual development but also their development as human beings.

“I recall a teacher in an urban high school working with a diverse group of students, responding to the poem one of them had written with, ‘You really are quite a poet.’ The student, who until that point had met little success academically, began carrying a paperback book of poetry around in his back pocket and writing more poems. By representing him as a poet, the teacher had opened the door for this student to entertain the possibility of becoming the kind of person who reads poetry. . .” —Peter Johnston, Choice Words

In Choice Words, Peter shows us how language can be powerful enough to change behavior. Through his observations of successful literacy teachers, he shows us some of the ways in which language impacts students’ literate and intellectual development by exploring words and phrases that turn up in conversations in the classroom. He then gives us productive phrases and words used (or not used) by teachers and explains why they are significant.

“Teachers play a critical role in arranging the discursive histories from which these children speak. Talk is the central tool of their trade. With it they mediate children’s activity and experience, and help them make sense of learning, literacy, life, and themselves.” —Peter Johnston, Choice Words

According to Peter, the phrase, “Say more about that” is less ordinary than it seems. It is a teacher’s best assessment tool. It lets you know what the children are thinking and—at the same time—gives students the sense that they have something to say. And when the teacher asks later, “What did Michael say?” the student who spoke feels respected and deputized as someone worth listening to.

Words have the power to open minds—or close them. While Choice Words demonstrated how the teacher’s words affected the classroom culture, Opening Minds shows us how to use words to shape students’ learning, their sense of self, and their social, emotional, and moral development.

Engaging Literate Minds is a compilation of Peter and six colleague’s experiences in their classrooms, which are thriving socially, emotionally, and intellectually. They share their stories about what it took to get there using Peter’s Choice Words and Opening Minds as their guide, and through their shared experiences they show you how you can make your own classroom into a healthy literacy learning community like theirs.

For example, Tara Krueger describes her first- and second-grade classroom where her students prefer to stay in from recess to reread and highlight a transcribed class discussion of The Lotus Seed to see if they could draw any “new conclusions.” And co-author Merry Komar shares a moment from her second- and third-grade classroom when one “third-grade girl working at a table alone (by choice), suddenly looked up and, with enthusiasm but apropos of nothing and to on one in particular, announced, ‘I love working with other people!’ before returning immediately to her work (alone),” (Johnston, et al., 2020).

Events like these are normal in these authors’ classrooms because they have discovered how to create a culture where students are caring and intellectually engaged by themselves, collaboratively with peers, and with mentors whose presence in their classrooms are only through their books. In this book you will learn why these events are important and how to make them normal for you too.