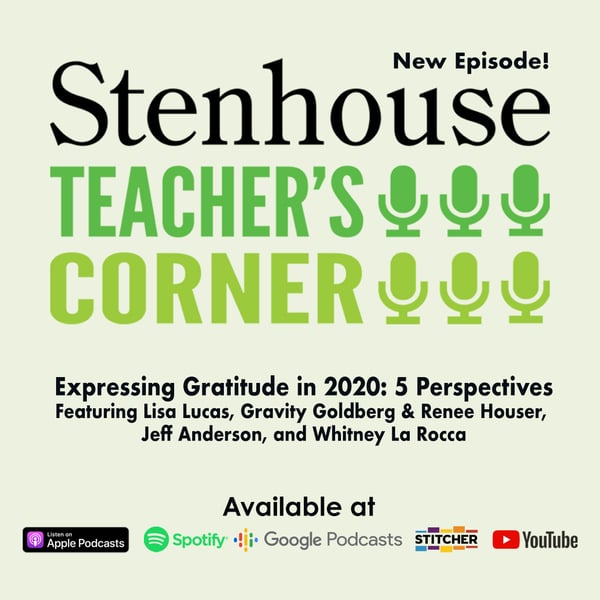 When we set about creating today’s Teacher's Corner episode, we knew we wanted to explore the idea of gratitude with several of our authors. What we could not have anticipated is how open and gracious they were.

In our first segment, I speak with Lisa Lucas, author of Practicing Presence about what we experience physiologically when we express gratitude and how we can incorporate gratitude into our classroom and daily lives. (Timestamp: 1:12 - 20:29)

Next, Gravity Goldberg and Renee Houser, authors of the Teachers Toolkit for Independent Reading, discuss how gratitude is embedded in their teaching and its role within a growth mindset. (Timestamp: 20:30 - 29:44)

In our last two segments, Jeff Anderson and Whitney La Rocca, authors of Patterns of Power, each share how the changes forced by the pandemic provided unexpected, but necessary gifts. (Timestamp: 29:45 - end)

When I think of gratitude this year, I think of a lot of things that don't, on their surface, look like good things, but as a result of those things, good changes were made in my life. For example, the pandemic is a horrible scourge on this Earth, but about a year ago, I was diagnosed with Parkinson's disease and I've been going through treatment and doing exercise and all that stuff, but one thing that was really throwing me off was travel. And I travel a lot. I would do a workshop for six, seven hours and then get to the airport and get through security and all that mess, and since I make my schedule two or three years in advance, I didn't have any power to change that. I just, I felt like I had to keep going. I don't feel like I could cancel things.
And anyway, I didn't have to cancel things, come March. March 3rd was the last day that I worked in a school in a live way. And I started being able to, because of cancellations, have more time to take care of myself; the hours of day that I needed to spend doing certain speech exercises and physical exercises and PT exercises, and all that kind of stuff. And I was able to do them more.
And what I found is come about June, I was, my mood was different and I had the ability to write again. And I've been having a really hard time writing the middle school Patterns of Power. Sometimes I'd have to turn it over to my co-writer and say, "Here, type this," or I couldn't point and drag something because I just didn't have the small motor skills to let that happen.
But because I was forced by the pandemic to stop working in a way that I wouldn't have been able to, and yes, I'm still surviving and I'll be okay, but things are different and I have to make different choices in my life.
But getting back my health, getting back the power to type. I can type now. I just remember one day I was just typing and I was like... Thoughts were coming in. I was just able to type them, and I was amazed because I wasn't able to do that for a while. And my mood changed and a lot of my symptoms started to reverse and there were some... I still had some work because, later, after several months, starting in June. I had one in July. I had one in August. I had two and those were so close in a row. I actually got thrown off just by doing two in a row, and I was doing all this with travel before. And these were all just on the computer doing Zoom. What a gift that's been. I said I would never ever do it, and then here I am doing it.
And it's helping me to be able to survive and connect with teachers and such in ways that I just didn't think possible. And so, I'm grateful not for what the pandemic has done to people in this world. I'm very sad about that and I acknowledge my sadness for all the people and destruction that it's done in this world, and yet I was unable in my current state of mind, able to cancel things and they just got canceled for me and I got better. And even though it's a progressive disease, I am better. And it's because I was forced to cancel a lot of things but that's what it ended up doing for me.
So, I acknowledge it's a horrible thing. It's just for my particular situation, it allowed for me to blossom. It allowed for me to find my health again, to find my mind, to find my typing fingers, to find my ability to not shake, to find my ability to talk again.
It was even hard to talk. So, here we go. That's what I'm grateful for in 2020. I'm grateful that we made it. I feel gratitude for all the people that have made this life possible, and I get to enjoy and meet with teachers and share with teachers in my books. What a great life this is to live, and I'm probably more grateful now than I ever was. I'm more healthy now than I have been in years and it's all because something I was unable to do for myself, the universe just did to me, and it ended up working out well for me. Thank you for listening.

Whitney La Rocca: Anyone that knows me, knows that I am one who tries to look at everything in a positive light, looking for the good in people, in situations, in events. I try, it's not always easy, but I try. I believe in celebrations, little celebrations, like finding something each day to celebrate. And that's how I live my life, finding something each day to celebrate. And through celebration, I find gratitude. So today, I'd like to tell you about my golden retriever, Sam, and time. Yes, time. So, you may or may not know this about me, but I'm a runner. I love to run. This is my me time. Sometimes I think, and revise and debate my thoughts. But most of the time, I just let that music carry me. And I sing, and even I dance sometimes. In fact, I used to run full marathons until I realized that half marathons were definitely a better fit for me.
Whitney La Rocca: And, I still try to run a couple of half marathons a year. So, I want to take you back to 2006, when I adopted Sam from a friend who was not able to keep him. He was nine months old. And if you know anything about puppies, like golden retrievers, they need a lot of exercise. So, my friend felt that I would be a good fit for him. And yeah, she was right. Sam became my favorite running partner. We ran everywhere together. He would have become my best friend anyway, as dogs always do. But, the running we did together provided an even deeper bond between us. It's like we spoke to each other. Maybe, I didn't always know what he was thinking, but I like to think I did. Over time, he of course grew older, and our runs turned to walks around the neighborhood, to walks to the end of the street, and eventually to hobbles to the mailbox each morning. He could barely walk, but he still expected that time with me on the leash every day. Time.
Whitney La Rocca: I'm so thankful for the time I got to spend with him in this way. At the age of 15, Sam's legs that carried him on our runs and walks, just no longer worked for him. And, I knew the time had come to say goodbye. So, this week Sam was surrounded by those who loved him most. As my husband, my daughter and I held him and hugged him, shared our favorite stories with him and cried as we watched him leave us here on earth. And sad as this moment was in my life, I'm able to reflect on the gratitude I have. First, I'm thankful to have had that time of as many years with Sam as I did. He was such a mischievous puppy and younger dog. I clearly remember the time he showed up at the back door with one of our fence pickets in his mouth, and even tried to bring it inside.
Whitney La Rocca: I still, to this day, do not know how he got ahold of that picket. And the time when Emery was born, he stayed near her. Definitely her gentle giant, making sure she was safe. But you know what? Even more so, I'm thankful for the time that COVID-19 has provided me to be home, and the time to spend with Sam. And, the time for Emery, nine years old, to spend with him too. During the school day, she sits on one side of the counter with her computer and school materials, and I sit on the other side with my computer and writing materials, working on my new book. And, Sam has slept on the floor between us. This time has not only provided us with a chance to spend every last minute with our loving pet. But, when it came time to talk about Sam leaving us, Emery was able to have a better understanding of why. Because, she has seen the decline daily throughout the past few months.
Whitney La Rocca: A few days ago, Emery's amazing teacher started the day off with a Bruno Mars song, Count On Me. You can count on me like one, two, three, I'll be there. I'm terrible singer, but you know. As I listened to the song and watched Emery sing along and dance to it, I thought of Sam. And, this time that we've had together as a family, as friends and how much closer we've become through it all. And, my husband who leaves for work every day comes home to a family that counts on each other. COVID created time for us to be together, for us to love together, for us to grieve together, and for us to remember together and for us to laugh together. And it provided time, without the hustle and bustle of our normal lives for Sam to have us, the people he loved unconditionally, no matter what, fully in his life for the last nine months of it. Time for us to return the love and devotion as best friends, family. And for this, I am most grateful.