PODCAST: Math Instruction in the Age of COVID-19 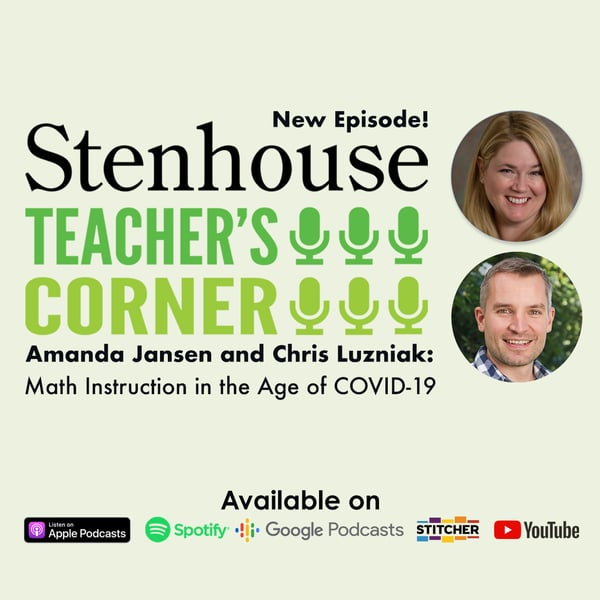 In this episode of Teacher's Corner, we checked in with math educators Amanda (Mandy) Jansen, author of Rough Draft Math,  and Chris Luzniak, author of Up for Debate! and we asked them to share their experiences teaching during the pandemic. Listen to hear their thoughts on how communication with students and colleagues has changed, and the challenges and opportunities presented in moving math discussion from the classroom to Zoom sessions.

Amanda (Mandy) Jansen is a Professor in the School of Education at the University of Delaware where she teaches future elementary and middle school mathematics teachers. Prior to becoming a professor, she taught junior high (grades 7-9) mathematics in Mesa, Arizona. She earned her Ph.D. in educational psychology from Michigan State University.

High school math teacher and debate coach Chris Luzniak longed to see his math students as empowered and engaged as the students on his debate team, so he began incorporating debate structures and techniques into his math classes. Excited by the growth he saw in mathematical thinking and participation, Chris continued experimenting. Over the years, he developed and refined math debate routines that really work, which he uses daily in his current middle and high school classroom. Chris has been teaching math for the past 15 years, beginning in New York City public schools, and now currently at The Archer School in Los Angeles.

Nate: What's the current state of your state with regard to back to school?

Mandy, in Delaware, if my information is up to date, you have three possible scenarios depending on how things develop in the coming weeks, yes?

Mandy: The governor got together a committee and some working groups and did surveys of students and parents and teachers, and they developed three plans depending on how extensive the cases are at that time. The plans are what it takes to be fully online, what it takes to be hybrid, these various versions. We're told that the state, the governor will come out with a clear stance sometime in early August, so that's for the K-12 system. A lot of us who are teachers or work with teachers, that uncertainty creates another level of stress because folks want to plan, but then also they want to be safe and be healthy.

Mandy: The state, I think, I really appreciated the way they've taken into account a lot of different stakeholders' perspectives when making the plan. Right now, there are guidelines and recommendations to think about. We don't know what phase we're going to be in for the schools, but once we are told about that then you know what the recommendations are from there.

Nate: And you’re a professor at University of Delaware?

Mandy: Yes. I work at the University of Delaware and I teach future teachers, and then I do professional development with practicing teachers. I teach undergrads and the University of Delaware originally had a plan that they we were wanting to be some version of hybrid, where it would be face-to-face one week, and then off campus the other week and alternating which classes were on campus, but just last week, they changed and they said, "We're all going to be online."

Mandy: Now that looks like the fall is going to be online. Originally, it was going to hybrid through Thanksgiving and then online after Thanksgiving, but now it's all online for the fall.

Nate: I wonder if universities are in general, better equipped for online learning compared to K12 schools

Mandy: That's an interesting question. Universities often had already offered a range of classes online before, so there were models in place, but individual faculty were inconsistently prepared and ready, so some folks who have never talk an online class before, it was the same kind of big lift. Then the question about what is more equitable or supportive of students, to be synchronous or asynchronous, was a decision often left to the faculty member to sort out with their students. That was a complicated set of decisions to make as well.

Chris: Are you going to be more synchronous in your classes?

Mandy: I moved my class; I taught a math class for future elementary teachers, and I moved that class online, and I did a lot of surveying of the students, what resources they had, where they were going to be able to access the internet, would it be fast enough for synchronous, would they have printers, what do they have? Based on that, and then the overwhelming student response, "We want a math class to be synchronous. We want a math class to be in real time." Because they seemed to have the wifi access in my class, we went synchronous.

Mandy: I think one reason why it worked is they had some other classes that were asynchronous, so I worry if all of their classes were synchronous, what kind of drain that would be on them, but they seemed to appreciate the real time nature of it.

Nate: And Chris, you teach in Los Angeles County, yes?

Chris: Correct, yes. LA and San Diego just a few weeks ago declared that they're going fully online for the entire fall semester. I'm at an independent school, so we don't have to follow that, but we at least are going to start the year fully online. It's kind of like Mandy was saying, we had a hybrid plan of a week on campus and a week online, but that's now pushed off for some time in the future when we can do that. I think for at least August, September, we're definitely online, and we're going to kind of take it month to month and see how things go.

Chris: It's really hard because our school is so much built on the quirky, fun community building. I'm at an all girls' school, so the relationships and the presence on campus and all the fun, weird things that we do as part of our school culture is such a trademark for the students, it's really hard for them to be separated online.

Mandy: Chris, did it reduce any sort of stress for you when the school said, "We're going to go completely online," or are you missing the notion that you could see them face to face sometimes? How did you feel?

Chris: I think it was, for both myself and many colleagues, it was stress reducing rather than the uncertainty of this back and forth, are we going to open online or are we going to still do a hybrid? It was kind of waiting from day to day. Just having a decision, even if the world suddenly got better tomorrow, just having a decision in place so that now I can plan for a couple weeks from now. It's not that far away until the first day. We can figure out together as a department and as a faculty how to best connect with students online and start their courses and start the year online. It's really helpful, the more advanced notice we get the more I can start to plan ahead, and, I imagine, same for you.

Mandy: I'm actually on Sabbatical next school year, so I'm not teaching. I'm working on research and writing. But I very much am invested in what's happening because my colleagues, teachers I collaborate with, but I would have already been at home.

Nate: Chris, you mentioned about the relationship building that happens at the beginning of the year, how are you and your colleagues, how are you going to do that online?

Chris: Relationships and social-emotional learning and all that stuff is at the forefront of all of our faculty's thinking and definitely all of the questions that come up within our department meetings that we've had. We've had a couple optional department meetings over the summer. Everyone's really concerned, but also constantly thinking about it and coming up with different ideas and sharing with each other.

Chris: I think our first lesson back is going to be a lot more getting to know you and silly, ice-breaker questions and activities and things than I even would normally do when we would be in-person on the first day or two. Our middle school is having two full extra days earlier than the high school so they can have a lot more time ... a lot of those students are brand new to the school, because we're a six through 12 school. A lot of our sixth and seventh graders are new to the school, so they want to have lots of time of just getting connected and building a little bit of relationships and getting to know the teachers and the school and the online routines as well.

Chris: I'm thinking a lot about, like Mindy, you were saying, my math students really did like synchronous. Even just 20 minutes of synchronous, we kind of connect and do some stuff, and then I can send them off to do some problems with a friend virtually or solo. I'm thinking about when I do some synchronous time and do breakout rooms, or giving each breakout room a fun, non-mathy question. I'm thinking also this year some of them won't even know their classmates. When we went online in the spring last year, they already knew each other, but some of them don't know some of their classmates yet. A lot of them don't know me yet. I think in every single class period there's going to be a, "Go to breakout rooms, do the silly question, and then do these three math problems," or something like that.