By Amanda Jansen and Leah Simon 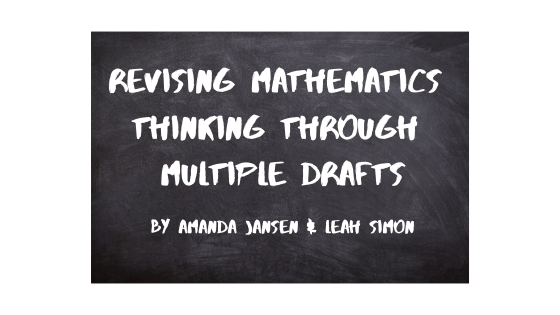 The Benefits of Revision

During mathematics lessons, it can be productive to elicit students’ draft ideas and then give students a chance to revise their thinking. There are many reasons to invite students to revise their thinking as a part of a mathematics lesson. Promoting revision in the mathematics classroom communicates to students that learning takes time and that it is normal for our thinking to iteratively evolve and shift. When students compare and contrast their initial drafts, they can learn from their peers. This process helps students learn to listen to one another and value the ideas of their fellow classmates.

In addition to all of these benefits, another reason to revise is to track the evolution of thinking. Then students can see how their ideas grew and changed. If students record multiple drafts of a solution, they can reflect on how and why their thinking shifted. Such a record helps students become more aware of their learning. Students might be unaware that they had a discovery or they could even lose track of it, even if the discovery had been a highlight for them in the moment. Keeping track of drafts helps students and teachers recognize and celebrate learning.

Using Rough Drafts in the Classroom

Leah Simon, a high school teacher in New Lebanon, Ohio, at Dixie High School uses rough draft math practices in her classroom, and one structure for revising that she implemented is a “Multiple Drafts” approach. Multiple Drafts is when a student writes more than one draft of their thinking on the same sheet of paper. In between each draft, students hear and think about ideas that help them revise their original draft.

To think about functional relationships, Leah played a video (https://youtu.be/6f2tgO2x5ms) of a human slingshot ride. After watching the video for the first time, she and her students made a list on the board of everything they noticed about the ride. Some students also drew from their personal experiences with this ride. She then replayed the video and asked the students to sketch out a first draft of a graph that depicted the relationship of height vs. time throughout the ride. Students drew this graph on a sheet of paper that was divided into three sections labeled as Draft 1, Draft 2, Draft 3.

From here, Leah displayed some of their second draft graphs for consideration by the class. She strategically selected graphs that had features not congruent with the earlier list of observations, including a graph that did not start at the origin, a graph that was pointy at its critical points instead of smoothed out, and a graph that did not oscillate around a horizontal line above the x axis. Leah invited each student whose work was shown to explain exactly what their graph showed and how it represented that. Through this, students highlighted features of the ride that the rest of the class may or may not have depicted in their own drafts. She and the students noticed the behaviors depicted in these graphs and revisited the actual ride, where it would start, the motion on the ride, and the end behavior including how someone would exit the ride. Finally, students created a third draft.

In the student work sample here, we can see that the second draft has the oscillations spaced out in different intervals of time compared to the first graph. We can also see that the third draft has a different starting point and ending behavior. Through the process of multiple drafts, students can notice additional features of a relationship and learn how to depict them mathematically.

The multiple drafts revision experience is a good match for graphing a video story as students consider various features in a video-based situation. (For more tasks like this one, visit the graphing stories website.) However, teachers can apply a multiple drafts approach to many kinds of tasks, including asking students to write more than one draft of a story problem to align with a graph or more than one draft of a justification to explain why a conjecture is true.

It is our hope that teachers will continue to share ways in which they engage their students in #RoughDraftMath on Twitter. Leah and Mandy met through interacting on Twitter, and they have enjoyed thinking together about mathematics teaching. They hope to learn from other teachers about how they enact rough drafts and revising in their mathematics lessons, so the community of mathematics teachers can continue to grow together.

Amanda (Mandy) Jansen is the author of Rough Draft Math and she is a Professor in the School of Education at the University of Delaware.