In this Something To Talk About blog post, math coach Jenna Laib shares how student work can spark powerful mathematical discussions and how teacher intentionality within these discussions matters.

While some brilliant discussions emerge spontaneously—happy accidents—productive conversations are more likely to happen when we plan for them deliberately.

These four principles are aspirational, but I think they’re also achievable. How do we bring them to life in the classroom?

When I first started teaching, I had a set routine for closing a student work session: I would ask everyone to bring their work to the rug—our classroom meeting spot—and place it down in front of them. “Now,” I would say, calmly drawing attention to myself. “Who would like to share their work?”

Sometimes, the shared work would launch a lively debate amongst the students. Did the class agree with everything Lucas said?

However, if I’m being honest, it more often resulted in a series of dry mini-lectures, delivered by nervous 9-year-olds. Students talked at their classmates.

These classmates may or may not have been more invested in the doodles creeping down the margin of their paper than in the person sharing. Rarely did this turn into true discourse.

Thankfully, I discovered that selecting student work in advance would help us address the first two principles: discussions should achieve a mathematical goal, and students need to know how to share so that their ideas are heard and are useful to others.

A Look Inside a First Grade Classroom

Students in this first grade classroom were working on story problems. The following problem represents a task from Unit 1 of the Investigations curriculum.

During the launch of the problem, students retold the story in their own words. They listened to one another’s retellings, and built off and clarified the ideas. We used productive talk to enter the task.

Then, students set off to work. Students recorded their answers, drawing various representations and experimenting with writing numerals.

During work time, I observed and conferred with students. Most students recognized this as an addition story. Student strategies seemed to break down into three larger categories:

Selecting accurate work does not necessarily lead to meaningful discourse amongst students.

I chose work from two students, Milo and Layla, and started to plan how we could compare and connect these two work samples. “Compare and Connect” is an explicit discourse structure named in Intentional Talk.

Milo had drawn a number line that showed 6 jumps, starting at 5 and ending at 11. 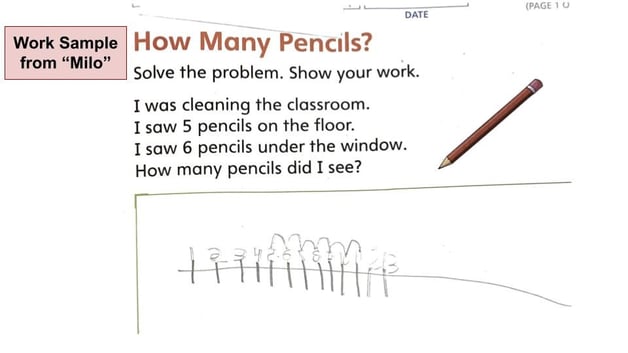 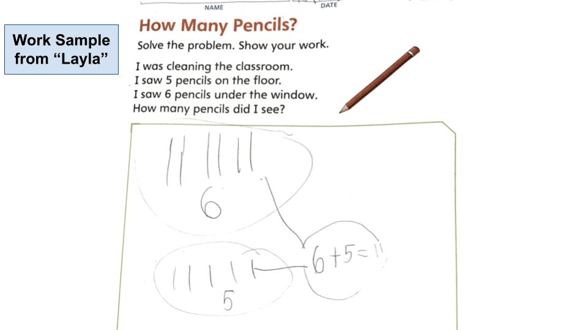 Starting with a Question

Students gathered at the rug, with empty hands. We were there for a purpose. “We are going to look at work from Milo and Layla,” I explained.

“That’s not the six. I drew the six,” Milo protested.

Cora raised her hand. “Oh, I think I see the six!” Cora’s index finger pointed excitedly towards the board. “It’s in the jumps!”

Heads turned towards Milo for clarification.

“I counted on, too!” Ezra shouted out. I asked other students to signal that they had used a “count on” strategy with a hand signal we use to indicate ‘same-same.’

I put Layla’s work on the document camera, and asked students to talk about what they noticed.

“She drew the pencils. You can see them.”

“You can count all the pencils.”

“She wrote a number sentence.”

“That’s not how I did it,” Layla said calmly. It’s easy for first graders to adopt a defensive tone, but she spoke evenly. She seemed to realize that this misunderstanding wasn’t a threat to her intelligence or her work.

Principle 2 of Intentional Talk: Students need to know how to share so that their ideas are heard and are useful to others.

Layla stood up to explain her thinking further. 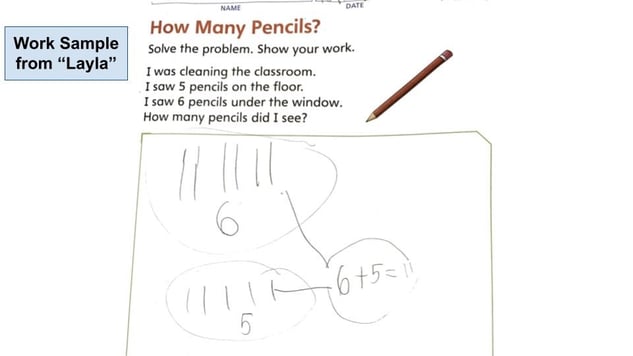 Layla knew how to share her thinking: come to the board, point and gesture to different parts, and walk us through her process. Students listened closely.

“So what’s the same about what Milo did and what Layla did?” I asked. “They both…”

“They both have numbers.”

“They both counted on.”

Students immediately started to contrast and connect the two representations.

“You can see all the pencils, so I like Layla’s.”

“Milo has jumps. Counting on is jumps. Layla has pencils.”

Students were using evidence from both their visual interpretation of Layla’s work and her oral explanation of her strategy. This meant that she communicated her ideas clearly, and that students had oriented to these ideas.

Furthermore, students were then grappling with how to make sense of these two representations, how to connect them, and even how to evaluate which representation made more sense to them. While the students’ conversation did not necessarily build in a linear way—ideas were not always connected and sometimes overlapping—they all contributed to the fabric of understanding.

And I’m glad that the students had the opportunity to share and listen to ideas. Instead of lecturing at listless classmates, students had something to talk about…together.

Jenna Laib is a math specialist for the Public Schools of Brookline, MA. She started her career as an upper elementary classroom teacher and later became a grade 6 math teacher and K-8 math coach. She is grateful to have wonderful colleagues—at her school and in the larger math ed community—to share in the pursuit of dynamic and equitable learning environments. She tweets @JennaLaib, blogs at http://jennalaib.wordpress.com, and curates slowrevealgraphs.com.