Building Classroom Community with a Compliment Circle (Something to Talk About)

In this month's Something To Talk About blog post, third-grade teacher Janaki Nagarajan writes about her experiences with Compliment Circles and how much this kind of talk matters in classrooms right now.

“I would like to receive a compliment,” requests a third grader named Destiny, holding tight to a mottled stick adorned in pink glitter glue.

Around the classroom, about half a dozen hands shoot up, and within a few seconds Destiny chooses Chloe, who says, “I would like to give a compliment to Destiny for being a unique person, and inclusive, and always asking people if they want to be partners.”

“Thank you,” Destiny replies, before passing the stick to the next student.

In our classroom, this exchange is part of a Compliment Circle, a routine we began early in the school year. Students (along with myself) arrange chairs in a makeshift oval/rectangle shape around the classroom, desks in between us, and pass a “talking stick” around as we either ask for or give out compliments to others in our class.

The routine was born out of a particularly challenging start to the school year. Students were struggling to interact with each other in ways that felt positive. Of course, these social challenges were understandable. Many students hadn’t been in a physical school environment for a year and a half, and even those who had come in person had experienced a very different method of schooling in the spring (shorter hours, smaller classes, less academic demands).

Whatever students’ experiences were last year, they looked vastly different from the world they were expected to inhabit this year, with little extra support. I could tell it was going to be more important than ever to think about ways to help students feel connected to and invested in one another.

In considering ways to do this, I recalled the idea of a Compliment Circle. I came across the specifics via the Positive Discipline website, where a Compliment Circle is described as the first part of a larger Class Meeting routine. I felt it was worth a shot to see how students would feel having a space for highly structured, positive and communal interactions.

During our Compliment Circle (which we also call a Class Meeting) students have three options when it’s their turn with the talking stick—give a compliment, ask for a compliment, or pass. 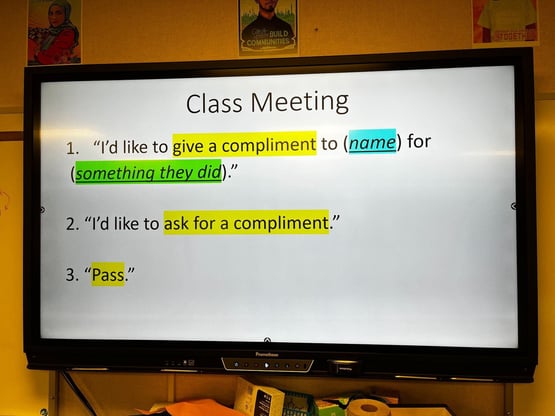 As with any new routine, it took a while to learn the ropes. It felt important to me from the get-go to let students mostly take the lead. Besides giving reminders about the talking stick rule, or occasionally pausing to talk about what makes an appropriate or kind compliment, I stayed silent, observing and listening along with everyone else.

Some days, students were heavily invested, and I noticed them moving from surface-level compliments (“I like your shirt.”) to sincere and thoughtful ones (“Thank you for being a really kind person.” and “I want to give you a compliment for always asking for help if you need it.”). Other days, it was a struggle to maintain the routine in a way that felt positive and safe for everyone.

Returning to the Compliment Circle

My initial idea with the Compliment Circle was that we would do it a few days a week until we felt we didn’t need it regularly and could use our meeting time to discuss problems we are having and potential solutions (more like a traditional class meeting). A change in our class schedule forced me to abandon the Compliment Circle entirely for a period—at the time I wasn’t sure it had made much of a difference anyway.

Coming back to the routine a couple months later, students seemed more invested than ever before. More students asked for compliments, more students raised their hand eagerly to offer compliments to others, and many students begged to continue the circle for another round. Students would often say,

The Compliment Circle feels freeing. Any student who wants a compliment can get one. There’s no judgment for asking versus giving a compliment (or deciding to pass). It is okay to ask other people to tell you something positive about yourself. It is exciting to be celebrated by your peers—not just your friends, but others in your class as well. It is exciting to celebrate your peers and see how with just a few words, you can make a positive impact on someone’s day.

Impact of the Compliment Circle

The Compliment Circle provides a structured routine for positive interactions. It is also student-led. My role is limited to giving or asking for a compliment when it is my turn—the same as everyone else. The power structure in the class shifts during this time. Student cliques and friendships take a backseat, and when someone asks to receive a compliment, without fail, about a third of the class immediately raises their hands, excited to say something positive about a classmate they may not normally interact with or even get along with.

I’ve noticed a transformation in our general classroom culture since we’ve made the Compliment Circle a regular routine. Students are more supportive of each other’s emotions (“If something happened you should tell Ms. Janaki and she can help.”), are able to resolve conflicts more smoothly (“You’re awesome. Don’t let anyone talk to you like that.”), and regularly check in with each other if they notice a classmate seems sad or upset (“Are you okay? Do you want to color with me?”).

The Compliment Circle has also given rise to more spontaneous and responsive community building in our class. Students often feel invigorated by the positive energy and excited to continue giving each other compliments, verbal and written, even outside of the circle. For example, the day before Winter Break, students started writing compliments to each other (and to me) on our classroom whiteboard. I joined in and wrote a note to each student in the class. Other students were quickly drawn into the excitement of compliment sharing. 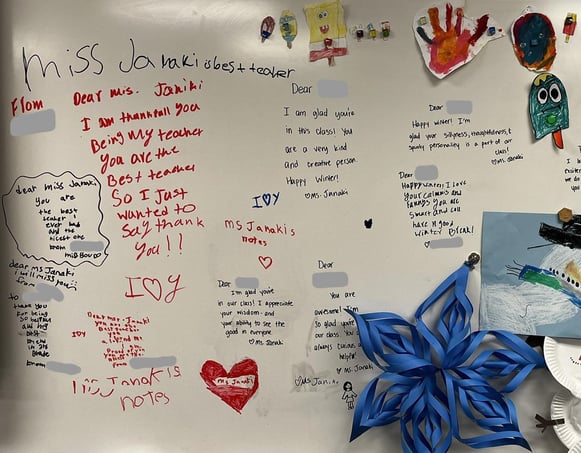 The Compliment Circle isn’t a band-aid. Sometimes we have days where it’s hard to think of serious compliments. Sometimes it’s hard to be quiet when a classmate has the talking stick. Sometimes something from earlier in the day is bothering us and it’s hard to shift into “compliment mode.” When this happens, it is still a gift to have time set aside to meet as a class, acknowledge how we are feeling, and do what we can in that moment.

We are still human, and sometimes we feel excluded and misunderstood. But our Compliment Circle has given us an important tool to celebrate and listen to each other—and most importantly, helped us realize we are all in this together.

Janaki Nagarajan is an early career elementary teacher in Seattle, WA. She loves learning about how children make meaning and aspires to center her teaching around student voice and choice. Janaki tweets @janaki_aleena and blogs at www.thinkingwithchildren.com.