"Open Middle Math celebrates that the journey we bring students on in our classroom matters more than the destination.” –Sara Van Der Werf, VanDerWerf Educational Consulting

Recently, we sat down with Robert Kaplinsky to talk about his new book, Open Middle Math: Problems That Unlock Student Thinking, Grades 6–12. Find out how Open Middle math problems can transform your middle and high school math class. 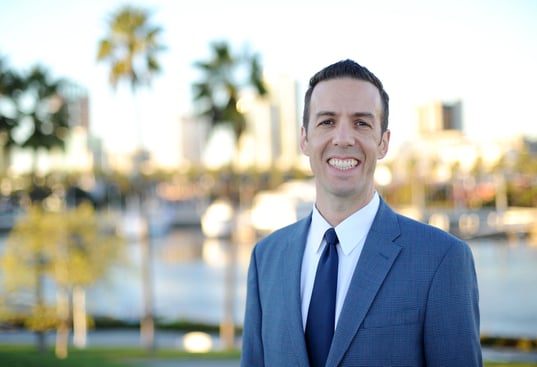 A: Many math problems that we do begin with the same problem, so the beginning is closed. And we end them with the same answer, so the end is closed. But the most interesting part is in the middle, where there are many different strategies. Sometimes there are open-ended problems where there are multiple correct answers. But the key about Open Middle problems, is that many different strategies can result in the same answer or similar answers. And then these great conversations come out about how the strategies are related to one another.

Q: What motivated you to write this book?

A: When I was in school, I was a math robot. I could do the math, but I had no idea what I was doing. I just thought I was good at following the steps. And then when I became a teacher later in life, I discovered Open Middle problems and realized that they could help me see which of my students were being robots and which students were deeply understanding the math. The power of using a procedural-looking problem to help develop conceptual understanding was really enlightening.

Q: How do students adjust to these problems when you introduce them?

A: Students will adjust to them differently. For some students it’s going to be a shock. They may have seen themselves as good at math because they can follow the steps well, but just robotically following steps in your notes won’t work so well anymore. And then there are some kids who think of themselves as not good at math in a traditional sense because they want to understand why things work and not just follow the rules. But you see them engage and open up, and this electricity happens.

When you start off with the right kind of problem and work your way to a standard that they're familiar with, you'll find kids won't want to stop. They'll complain if you don't use them often enough. It's just a crazy paradigm shift.

Q: Why would teachers want to use Open Middle problems with their students?

A: When I was in the classroom, I found that I would have students who seemed like they knew what they were doing; when I asked them questions, they got the right answers. But when they took the test, it was like a completely different student. They didn't seem to have that understanding that I thought was there. I wished I had something like X-ray vision where I could see into their minds and realize that there were these misconceptions while I still had some time to do something about it. So these problems opened up whole new world of what kids know and what they don't know while I still had time to do something to make their paths different.

Q: Do you anticipate that after reading Open Middle Math, a teacher will then have the information he or she needs to go forward and create their own Open Middle problems?

A: In the book, I walk educators through how to make their own Open Middle problems and how to make small tweaks to existing problems so that they can make something that meets their needs. But teachers already have so much on their plates, right? So I would also look for already created Open Middle problems on openmiddle.com, where we have several hundred for elementary, middle school, and high school.

A: I think fundamentally, every teacher wants to do right by their children. I think fundamentally, every teacher wants to grow and be better. But there's an overwhelming number of priorities, to the point that everything is priority; there's never enough time. It’s frustrating when you’re supposed to take something written for another grade level and imagine how to adjust it for what you do. So, I’ve got examples in the book for every grade level from 6th to 12th including Algebra, Geometry, Algebra 2, Trig / Pre-Calculus, and Calculus. I also realize that there are no high school teachers reading books about math teaching who say, “I wish this book was longer.” So, I wrote this book to be the shortest book possible with all the information teachers would absolutely need to be able to implement this right away in the classroom.