"Most central to the belief system of a Hands-Down Conversation community is the conviction that all students are competent thinkers with valuable experiences and ideas to draw upon." 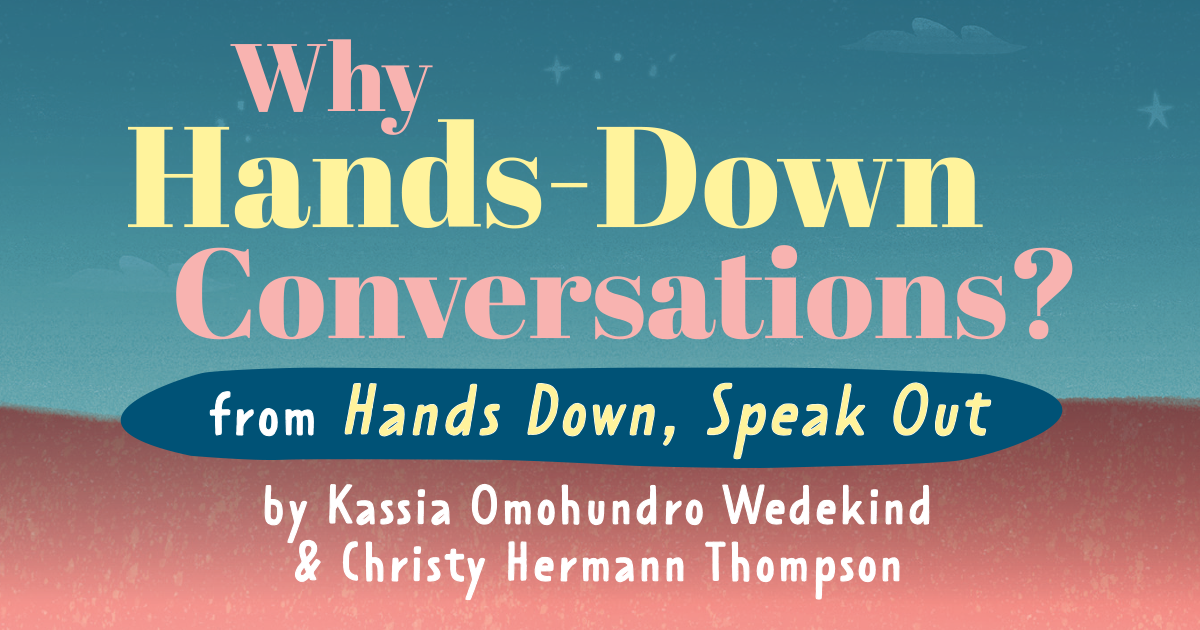 As mothers of preschoolers, we are deeply familiar with many episodes of Sesame Street. As teachers, we are particularly interested in the segments that are designed to orient young children to the norms of school. In one particular musical vignette, entitled “Two Different Worlds,” singer Ed Sheeran croons along with Sesame Street characters Elmo, Cookie Monster, Grover, and Abby about the differences between our school and home worlds.

Let’s take a look at the following exchange from a first-grade class that has just finished reading A Chair for My Mother, by Vera B. Williams (1982):

Teacher: So, who has an idea about what Vera Williams was trying to say with this book? What was her message to us?

Jenice: I think she was saying you should save your money.

Teacher: Okay, good, so the main character needed to save money over time to buy something big. That’s true. But what else is the author trying to say? What about the family? Christof?

Teacher: Mm-hmm, yes, so what is the author saying about that?

Tomás: That loving families are important?

Teacher: Yes, families are important. Why was the family important in this book?

(Three children raise hands; teacher looks at Jenice and Tomás, who have already
talked, and decides to choose the new hand up, Marcus.)

Marcus: They had to work together.

This conversation probably sounds like pretty typical classroom talk. In fact, it sounds similar to many conversations we have had in our own classrooms and to most of the conversations we had in the classrooms we grew up in as children. However, despite and even because of our familiarity with this kind of conversation, it is important to slow down and recognize some troubling patterns within it.

This conversation, like much of classroom discourse, is characterized by the pattern of Initiate-Respond-Evaluate (IRE), in which the teacher asks the whole class a question (Initiate), a student raises their hand to respond with an answer (Respond), and the teacher evaluates the answer as right or wrong (Evaluate) (Cazden 2001). In this kind of conversation, there is little room for negotiating meaning or lingering over questions to which the teacher does not already have an answer in mind.

The shift from traditional classroom discourse to a more dialogic discourse has been of interest to many teachers and researchers over the years. Ralph Peterson and Maryann Eeds (2007) describe “grand conversations” in which children construct meaning through talk in literature groups. Lucy Calkins (2000) and Jennifer Serravallo (2010) write about “whole-class conversations” as a structure designed to move students’ discussions about their reading beyond literal comprehension in order to focus on what a text “is really, really about” (Calkins, 15).

With respect to math, Chapin, O’Connor, and Anderson’s Classroom Discussions in Math (2013) introduces teachers to the idea of “talk moves,” a set of talk tools designed to deepen the level of mathematical discussion. Kazemi and Hintz build on this work in Intentional Talk (2014) by introducing different conversation structures that support students as they use talk to reason, justify, and figure out why things work in math.

Hands-Down Conversations build on these educators’ work to deepen the level of classroom talk. Calkins makes the argument that communities of readers are grounded in rich, authentic talk that happens daily, rather than occasionally. She writes, “If we want children to read with wide-awake minds, then we need to invite them to live this way in the dailiness of our classrooms. Teaching reading, then, is rather like teaching living” (2000, 15). We believe this sentiment is true beyond children’s reading lives. When we build talk communities with children, our greatest hope is that what they learn through talking about reading, writing, and math is matched by what they learn about living in the world with others.

So, What's a Hands-Down Conversation?

1. No hands. Listen for the space to slide your voice into the conversation.
2. One voice at a time (more or less!).
3. Listen closely to everyone’s ideas.

Hands-Down Conversations are designed to deepen the level of classroom discourse by creating conditions in which students take on greater ownership and have more decision-making power in conversation. The students’ ideas lead the conversation. And yet, while the teacher’s voice is much less present in Hands-Down Conversations than in traditional classroom discourse, the role of the teacher in facilitating the meaning-making remains critical. 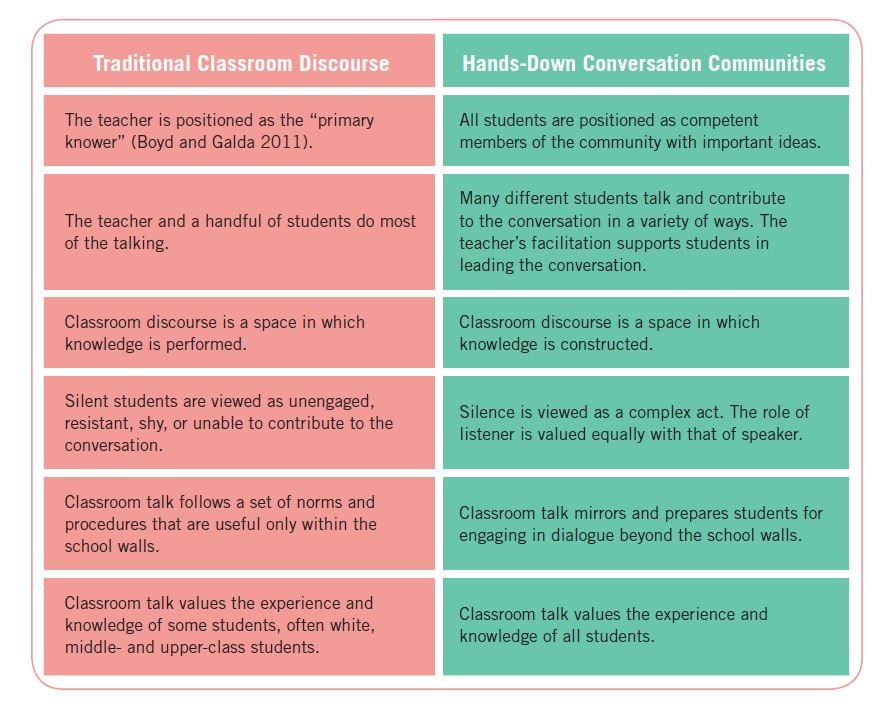 To get a deeper dive into each part of this chart, preview Chapter One.

This post has been adapted from Hands Down, Speak Out by Kassia Omohundro Wedekind and Christy Hermann Thompson.

Kassia Omohundro Wedekind spent many wonderful years as a classroom teacher and math coach in Fairfax County Public Schools in Virginia and now splits her time between being an independent math coach and an editor at Stenhouse Publishers. Her favorite days are spent in classrooms learning from the many ways children talk, listen and negotiate meaning together.

Christy Thompson is a Literacy Coach in Fairfax County Public Schools in Virginia. She has spent her teaching and coaching career particularly focused on listening to and learning from the talk of our youngest students. 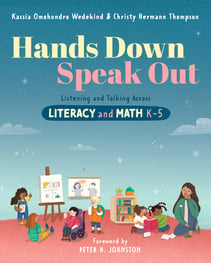