Highlighting the Which One Doesn’t Belong? Shapes Posters by Christopher Danielson

As Christopher wrote himself, “Most of the shapes posters available to teachers are very very bad. (Seriously…go ahead and do a quick image search on shapes posters….I’ll wait.) Everything is in standard orientation; the triangles are mostly equilateral; the rectangles never are, and on and on.”

The Which One Doesn’t Belong? posters, on the other hand, couldn’t be more different. These posters “are mathematically correct, and they also give everyone in the room something to think about. Why is there a square on the rectangle poster? Is a heart a shape? What about a spiral? Does a curve have to be curvy? Does biggest count as a property? These are the kinds of questions I meant these posters to elicit, while still serving the noble purpose of being a visual reference for important geometry vocabulary.”

The posters are designed to engage learners of all ages and include questions such as:

Unlike traditional math posters that may hang around collecting dust, the Which One Doesn’t Belong? posters are designed to be talked about!

Third grade teacher Janaki Nagarajan wrote a blog about using the Which One Doesn’t Belong? posters in her classroom. She displayed one poster each week and made space for kids to talk and write about them. “I had no idea what was going to happen – I gave no verbal directions (only vaguely pointing out we had something “new” in our classroom). It took a couple days, but students did start to engage.” Before long, students were using the posters to develop a shared definition of a polygon and talking with one another about what made the various triangles on the triangle poster similar to and different from one another.

Innovative teachers all over have found different ways of displaying and asking students to interact with their Which One Doesn’t Belong? posters. Some teachers laminate them and pull them out one by one, giving time for kids to focus on and talk about each poster. Other schools frame and display them all in a common area such as the front office, a hallway, or above a water fountain. We’ve even heard of teachers putting them in a classroom bathroom (“Hey, if they’re going to be in there anyway, they might as well ponder some math!”). 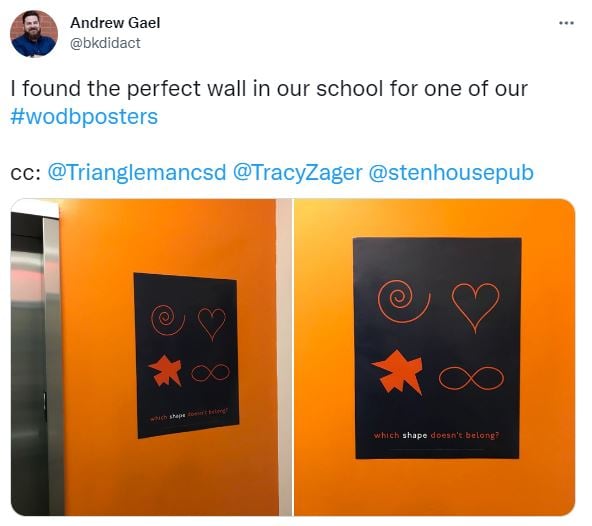 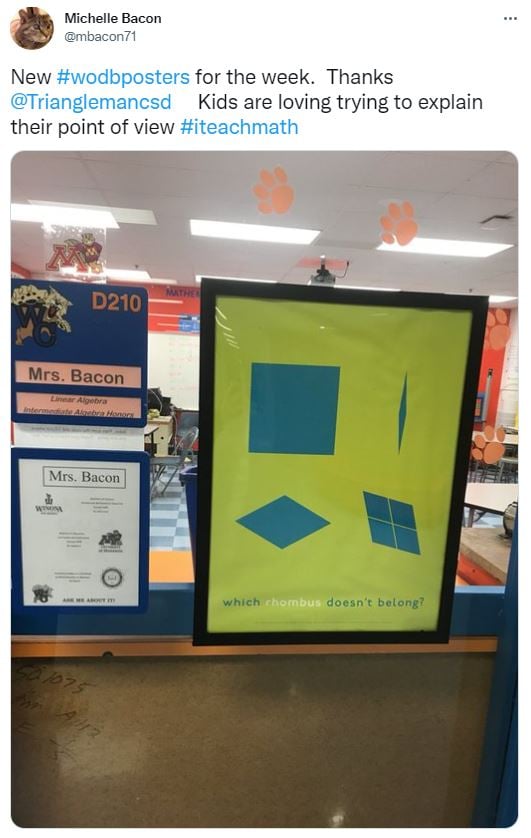 You can check out more ways that folks are displaying and engaging with Which One Doesn’t Belong? posters using the hashtag #WODBPosters on Twitter.

And today, in celebration of all the teachers and students starting their school year with Which One Doesn’t Belong? we’re giving away a download of the “Which triangle doesn’t belong? poster and a section of the teacher’s booklet that comes with the posters. Check it out and let us know how you’ll use it in your school!

Wherever your posters end up, they are sure to spark conversation, lively debate, and joy for a beautiful question with so many “right” answers. 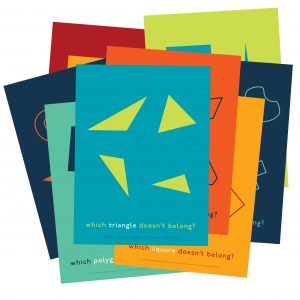