Math games and puzzles are a favorite part of math class for many students and teachers. But how can we create game-playing experiences that are mathematically meaningful as well as engaging and collaborative? Well Played is a book about just that. In it, Linda Dacey, Karen Gartland, and Jayne Bamford Lynch introduce us not only to a collection of well-choosen and fun math games, but also to explicit strategies and tips for getting the most out of each and every math game and puzzle we use.

Each math game and puzzle includes a detailed explanation of the math in each game, what to look for as students play, variations to extend or support game players and exit questions designed to help you assess how students are making meaning in the games and puzzles.

In today’s blog, we’re highlighting three of our favorite games and puzzles in Well Played, Grades K-2. You can click on the link for each game or puzzle to download a full description and materials to play. 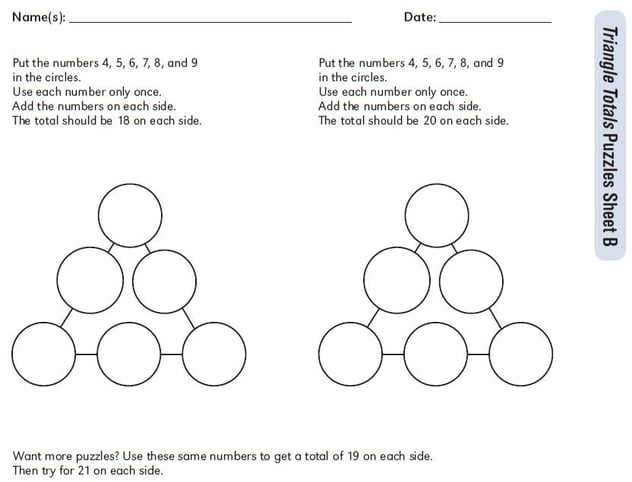 While many of us are familiar with playing games in math class, math puzzles are another way to get kids talking and reasoning about important mathematical ideas. Triangle Totals puzzles are a classic activity that requires puzzlers to arrange a given set of numbers in a triangle so that the sum of the numbers on each side of the triangle is the same. Solving these puzzles can be challenging and requires perseverance. Though students may begin with a random approach, they soon learn from incorrect guesses and use approaches grounded in number sense (such as not putting the three greatest numbers on one side).

Move Along focuses on subtraction with facts to ten, allowing students an opportunity to practice and talk about subtraction strategies as they move towards fluency. In this game teams try to move their game pieces along the path on the game board until they reach the Home space. On each turn, players draw two number cards and subtract each from ten. If at least one of the differences is listed in the next space, the team may move its game piece forward to that space.

Developing students’ understanding of addition and subtraction, rather than having them merely apply rote procedures, is a complex goal. To achieve this goal, we must offer our students many opportunities to discuss their strategies. In this game students draw cards randomly and write each number in an empty space on the It’s Greater game board. The spaces represent digits in two-digit numbers, with expressions involving addition and subtraction. The goal is to have all sums and differences be as great as possible. In deciding where to write digits, therefore, players must think about the kind of numbers that will result in the greater sums and differences.

Are you interested in even more math play? Well Played has twenty-five games and puzzles, focusing on counting and order, base ten numeration, addition and subtraction for grades K-2. You can read more about Well Played on our website, including a free preview of the book. And stay tuned for our upcoming blogs about Well Played, 3-5 and Well Played, 6-8. 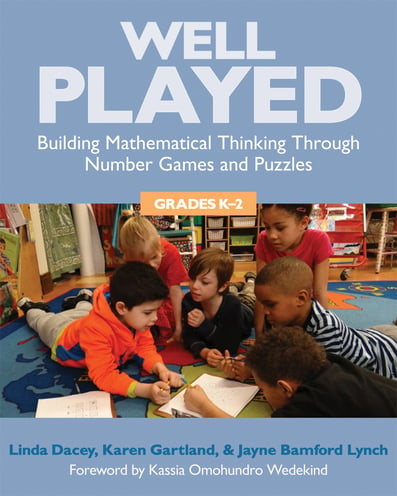