When Talking is Writing: Honoring Children's Brilliance through Oral Storytelling in Writing (Something to Talk About)

In this month’s Something to Talk About blog post, literacy educator, Grace Choi, shares how oral storytelling and short video recordings can be powerful tools for composing and revising in the writing classroom.

Surely, I cannot be the only parent whose children walk around the house pretending to be YouTube content creators. All day long I hear snippets like, “Hey, what’s up, guys! It’s your girl, back again with a new video!” I swear, my kids don’t even watch that much YouTube, but to them, the idea of sharing with and talking to an audience is exciting and fascinating.

As you can imagine, being on the listening end of these pretend videos can be a little… trying. But when I stop my eye rolling and peel back my annoyance, I also have to smile at my kids’ creativity. Because what they’re really doing in those moments is composing. And as they listen to themselves and adjust and modify what they’re saying, they’re also revising and editing. If that sounds familiar, it should. So much of what we do when we use talk to convey a message parallels the writing process.

Because what they’re really doing in those

moments is composing. And as they listen to themselves

and adjust and modify what they’re saying,

I’ve been thinking about this a lot lately as I work in classrooms. We continue to hear folks drone on and on about “learning loss.” And while it’s true that our students may have missed out on some content during virtual or hybrid schooling, it does not mean they are any less brilliant than students in years past. So as we think about how to help students continue to grow, we must bridge the gap between what they can do and what curriculum or standards want them to do. One way to do this work is to honor students’ abilities through oral storytelling and composing in the writing process.

Oftentimes, young children’s speaking abilities are more developed than what they are able to capture on paper. I think of my two-year-old nephew who is just beginning to dazzle me with stories of his adventures at daycare, but still hasn’t yet fully determined hand dominance. Or, I think of many of my former kindergartners who entered school telling detailed stories from home, but hadn’t yet learned to write their names. I could listen to any of those children talk to me for hours and marvel at the way they used talk to communicate a message. In my kindergarten classroom, we leveraged children's strengths as communicators and their talk became the launch to their writing. As Martha Horn and Mary Ellen Giacobbe write in Talking, Drawing, Writing, “...telling stories acknowledges talk as having an essential place at the core of writing.”

But, the connection between talking and writing doesn’t have to stop in kindergarten. It shouldn’t stop in kindergarten. In fact, as I’ve worked on this blog post for the last few days, most of the composing was done in my head (or, I’ll admit it, out loud) while driving in my car or taking walks. Thinking through and hearing your writing aloud is an integral part of the writing process and should be welcomed in the classroom. And when it is, a magical shift starts to take place.

Thinking through and hearing your writing

aloud is an integral part of the writing process

and should be welcomed in the classroom.

And when it is, a magical shift starts to take place.

The second grade classroom I’m working in recently started a new unit in writing workshop– realistic fiction. This was VERY exciting for the students who were thrilled to be able to create their own characters and stories. As we launched the unit, we noticed the usual “buzz” of writing workshop– writers talking to each other and sharing ideas, planning, reading, and rereading their stories. But, as we began to conference with students, my co-teacher and I realized that what students were putting on paper was vastly different from how they wanted their stories to actually unfold.

In a writing conference with Lincoln, I read about his characters, Mitch and Fred, and a conflict involving a dropped phone at a flag football game. The pictures and words he drew and wrote in his book were fairly sparse and I asked a few questions to gain more clarity about his story and think through what I might want to teach him in the conference. After seeing that Lincoln was a little exasperated with my questions, I said, “It feels like the story in your head isn’t quite matching the story you have on paper.” He agreed, and I decided to try something a little different: I invited Lincoln to video record his story as it might sound in a book. He excitedly agreed to this new idea– his whole face lit up and he approached the video recording with a renewed sense of energy about his story.

I decided to try something a little different:

I invited Lincoln to video record his story as it might sound in a book.

As I expected, the story Lincoln told orally was much more detailed and involved than the story he put on paper. But what was really interesting was that as he listened to his video after recording it, he realized parts that were missing or unclear and decided to re-record the story twice until it sounded the way he wanted it to sound. In those short few minutes, Lincoln not only boosted his confidence as a writer, but authentically revised and edited his story.

This first photo is a screenshot of Lincoln during his first recording. He was a little timid and mostly looked at his book while telling his story.

But here he is again during his second recording. Lincoln was much more animated this time as he revised aloud.

Of course, we did not leave his story only on video. On subsequent days of writing workshop, Lincoln returned to his video as a draft to decide how it would look in his book. As Lincoln watched and listened to his own story, he again revised and edited his book, using his video to strengthen his narrative on the paper. I used picture books including Minh Lê and Dan Santat’s Drawn Together and Lift as mentor texts to show how carefully selected words accompanied by well thought out, intentional pictures can tell magnificently detailed stories. The writing conference we had around these mentor texts allowed Lincoln to make deliberate decisions about which words he would write, rather than feel beholden to scribing every word he spoke in the video. 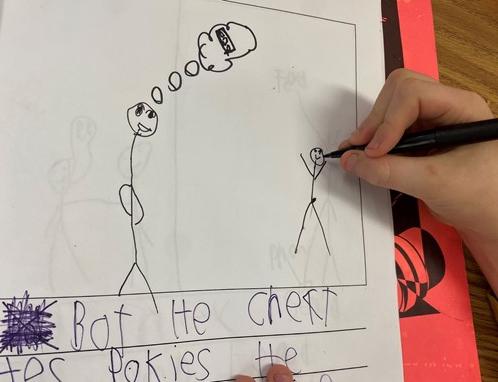 The excitement for composing orally and video recording spread organically in the classroom. After a quick lesson on how to get to the video camera on their laptops, the classroom teacher offered this method as another way of working during independent writing time. Suddenly, the room was really buzzing with newfound joy and enthusiasm. Rather than filling out an often labor-intensive or inauthentic graphic organizer, here was a new way to capture students’ story ideas. My co-teacher and I loved listening in as our second graders animatedly told their stories and then revised and edited them after listening. Some students, as you might have expected, even gave themselves a little intro and outro a la YouTube creators (and I chuckled at the fact that my kids are not the only ones who do that)!

The excitement for composing orally and

Now, let me be clear, our students are still putting pen to paper and writing and drawing out their stories. The way they are spelling their words and writing out their narratives is informing our next steps for word study and teaching age-appropriate mechanics. But, let me also be clear on this: for most of our students, the stories they are telling orally are still more complex and lengthier than what they are putting on paper. And that’s really okay with us.

Because here’s the thing, video recording their stories has opened up new possibilities for our students and has strengthened their identities as writers. This work says to them, “We know you have incredible stories to tell. Here’s another way you can share them with the world.” I imagine that as we wrap up the unit, we will invite students to share their videos alongside whatever written book they’d like to showcase at our end-of-unit writing celebration. And I imagine our writing celebration will be even more exciting as we celebrate all aspects of our writers' brilliance and the critical role of oral storytelling to the writing process.

This work says to them, “We know you

have incredible stories to tell. Here’s another

Grace Choi is an educator in northern Virginia. She spends her time teaching and coaching in elementary schools and loves experiencing the brilliance of our youngest students. She believes that giving students choice is key to developing lifelong readers and writers. You can follow Grace on Twitter @GraceKChoi.